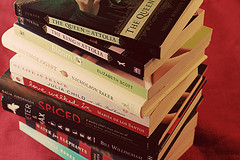 "Unbroken" will be discussed at book club meeting

The book club selection for February is  “Unbroken: A World War II Story of Survival, Resilience, and Redemption”  by Laura Hillenbrand.

The stirring tale of Louis Zamperini’s fight to survive after his Army Air Forces bomber crashed into the ocean and he was captured by Japanese forces has been on the New York Times bestseller list for more than four years. It has also been made into a movie directed by Angela Jolie.

The Dec. 21 issue of the New York Times magazine had an interesting profile of Hillenbrand.

The Feb. 11 meeting will be hosted by Bill and Karolee Bush. It starts at 6:30 p.m. For more information, contact Bill by email at  wgbkgb@yahoo.com.