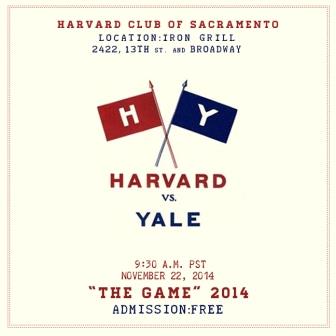 
Get out your Harvard banners and sweatshirts. Harvard plays Yale this Saturday, and club members will be gathering to watch the 131st playing of The Game on television and cheer on Harvard as it goes for sole possession of the Ivy League title.

Harvard is riding a 6-0 record in Ivy League play and is 9-0 overall. Yale, 5-1 in the league and 8-1 on the season, could claim a share of the Ivy League title with a victory.

The telecast starts at 9:30 a.m. PST.  The event will be at the Iron Grill at 13th Street and Broadway in Sacramento. There is no charge. Greg Taylor will be the host and official cheerleader.

We need to know how many people will attend. Please RSVP as soon as possible to Sadia Niazi. Her email address is sadiafniazi@hotmail.com.