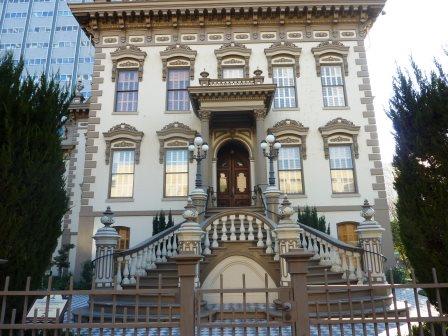 Club members will tour the Leland Stanford Mansion, 800 N St., in downtown Sacramento on Saturday morning, Feb. 21. The tour, which is free, will run from 11 a.m. to noon. A no-host lunch will follow at the Iron Grill in Sacramento. Sorry, but the guest limit for this event has been reached.

The mansion, after a 14-year, $22 million restoration and rehabilitation, is now open to the public as a museum. It also serves the citizens of California as the state’s official reception center for leaders from around the world.

Originally built in 1856, the mansion was later purchased and remodeled (twice!) by Leland and Jane Stanford. Leland Stanford served as governor of California in 1862-1863 and used the mansion as his office.

The mansion is a stunning example of the splendor and elegance of the Victorian era in California. On your tour of the 19,000-square-foot mansion you will see: 17-foot ceilings; gilded mirrors and exquisitely detailed carved moldings; beautifully restored woodwork;  elegant 19th century crystal and bronze light fixtures;  historic paintings; re-created carpeting and draperies based on photographs from the 1870s to  match the original interior design; original period furnishings that belonged to the Stanfords; and  19th-century style gardens.